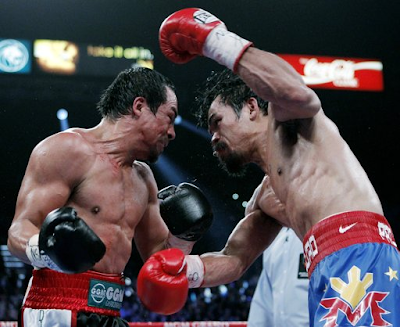 I believe this September is great month for boxing to remember. A lot of match up already happened and yet there is a few exciting to happen this weekend. I am very excited each time I open my Facebook update to see an overflowing boxing updates from all boxing sites I liked.

Let us talk about those updates.  Let me say September is “super” for boxing. Let us begin with AndreWard vs. Chad Dawson’s fight last September 8, 2012.

Prior to that fight I was intrigue with the confrontation between Adrien Broner and Robert Guerrero during Ward-Dawson weight in. It is Broner who was calling out Guerrero on twitter about a possible fight. Giving the fact that Guerrero is now campaigning at a higher division compared to Broner—this fight may not be possible at the moment.

If you miss that confrontation you can watch it here and notice how Broner reacted to it.

Now back to Ward vs. Dawson, this match-up was very rare according to Jack Slack (Combat Sports Premier Analyst) of Bloody Elbow. Slack told that,

“…Chad Dawson is a right handed southpaw, while Andre Ward is a left handed orthodox fighter. This is possibly the most unusual type of encounter in boxing because of the blind following of tradition that the coaching of the sport is rooted in. Both fighters’ power punch was their lead hand, while the traditional strategy against an opponent in the opposite stance (which I refer to as Open Guard) is to step the lead foot outside of their lead foot and land with one’s rear hand.”

What I understand is that Ward used the most practical technique considering and understanding their arsenal and stance.

Although technical fighter or shall we say scientific boxers are boring to casual fans but we can’t blame them because of match-up like this here.

Don’t get mistaken. This is not welterweight or any lighter division. This is heavyweight man. Heavyweights that traded fast combinations and exchange knockdowns. This fight is real fun that both casual and hardcore boxing love to watch.

As I continue to scan my Facebook stream, another one which I will not miss to share to you who was just announced on Thursday. Yes! Fighter of the Decade Manny Pacquiao finally announced the opponent for his December 8 schedule. It is Manny Pacquiao vs. Juan Manuel Marquez IV.

Now the question is why team Pacquiao come-up with Marquez? In an interview, Michael Koncz told Boxing Scene,

We just finished with the recent happening in boxing now, let us discuss the up-coming fights this weekend. Let us start with Jhonny Gonzalez vs. Daniel Ponce de Leon. I am interested in this match-up since De Leon has been a vanquisher of two prominent Filipino boxers. That is Rey “Boom Boom” Baustista and Jerry Penalosa.

I would be fun to watch a hungry hard hitting De Leon try to capitalize another title shot in his career. He was a cocky rising star then, with 90 percent knockout rate in his record. Most of them in round one. But when he face former undefeated Puerto Rican star Juan Manuel Lopez, De Leon was knocked out in round one.

Another thing to note also is a showdown of boxing cards this weekend in Las Vegas between Top Rank Promotion and Golden Boy Promotions.

Sizzling September huh! To top all these, again from my Facebook stream, Ricky “The Hitman” Hatton is returning to boxing. In a post by Badlefthook.com through iFilm London Ricky Hatton said,

“Thank you everyone for coming. It’s great to be back. I think the first thing I can start with is to answer the question of, you know, why have I decided to come back? For me — where do I start? There’s a lot of reasons. A lot of people will say, ‘What are you doing it for, Ricky? What do you need to do? You got beat by two of the best pound-for-pound fighters in recent years, your generation. Don’t risk your legacy. We don’t want to see you get hurt.”

Ricky Hatton retires after back to back losses from the two pound for pound greats Manny Pacquiao and Floyd Mayweather Jr. Hatton go up in weight to Welterweight to challenge Floyd and was knocked out in the tenth Round. In his next fight Ricky face Filipino boxing icon Manny Pacquiao in the weight he is undefeated—at Light welterweight but suffered a devastating defeat just in the second round. Manny knock Hatton cold.

Total it is the boxing fans who would be very happy with the jammed-packed September. We are hoping that kind of match-ups will carry over to coming month and the coming year.

December would be exciting too, since Pacman will be back against Marquez for the fourth time.

Let us brace ourselves for more this weekend as we see results from the cards we just breakdown above.