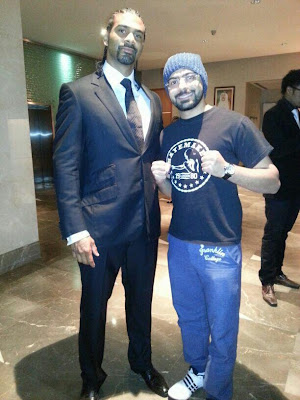 Photo via Instagram
Former Heavyweight and Cruiser weight champion David Haye is in Kuwait to attend a wedding ceremony of a Kuwaiti friend.
I am a follower of David Haye in twitter. In one of his tweet, it seems that he arrived Kuwait midnight of January 18, 2013 and was greeted with some Kuwaiti fans in Kuwait International Airport.
It seems to me that David Haye is staying at the Marina Hotel. So boxing fans in Kuwait might be able to have a glimpse of the champ in person around Marina Mall.
David Haye 26-2-0 (KO 24) of Bermondsey, London last fought Dereck Chisora for the WBO and IBO international titles and won via knockout in round 5.
Prev postNext post
Use ← → (arrow) keys to browse
Facebook Comments