You're here » Home » Uncategorized » Garcia-Matthysse rumored fight close to reality, but nothing is official 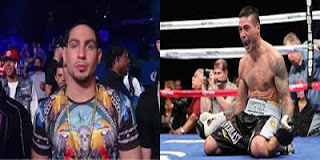 A possible fight between fellow light welterweight titlist Danny Garcia and Lucas Matthysse has been the talk all over the boxing world these past weeks, but nothing was official yet. The rumored fight will be on the undercard for the Mayweather-Canelo showdown on September 14.

Garcia-Matthysse will be a great boost in the card billed ‘The One’ if it will materialize. It will be a co-featured bout if Golden Boy doesn’t come up with anything bigger than Garcia-Matthysse. Both men held titles in the light welterweight division and looked very impressive on their previous fights.

Matthysse 34-2 (KO 32) is coming from a fresh TKO win against Lamont Peterson in May. He is a knockout artist that stops 86 percent of his opponent.  Garcia 26-0 (KO 16) also won his last fight against savvy veteran Zab Judah.

Now that the 11-city, two-country promotional tour for Mayweather-Canelo was over, Golden Boy Promotion will have time to make this fight happen. I think the reason of delay is that they are very busy with the promotional tour.

However, if Garcia-Matthysse has been official prior to the promotional tour—it could have helped the promotion.