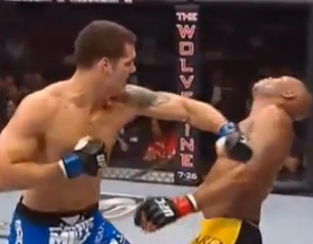 MMA│”Never underestimate your opponent”–this is the golden rule in any combat sports. “Protect yourself at all times”–is another word that a referee will remind the fighter before fight will commence in the ring or octagon. These words were ignored by former middleweight champion Anderson Silva.

Chris Weidman just proved these words its truest meaning that Anderson Silva disregard during their world middleweight championship fight in the MGM, Grand. Weidman knock Silva out cold after toying and showboating in the second round.

Silva seemed annoyed with what had happened in the first round. Weidman scored a nice take-down that put Silva in a difficult situation on the ground. Weidman was able to pound Silva several times. But Silva managed to stand-up and wanted to show to the crowd that what Weidman just did was nothing to him.

Right after the start of the second round Silva toyed and mimics a hurt fighter every time Weidman throws a punch. Wiedman made adjustment of what Silva just did and take advantage on Silva’s cockiness. Weidman throws a right, and Silva pretended that he is hurt, and then Weidman followed up. And he caught Silva with a left hook while Siva was leaning backwards. Silva fell flat on his back. Weidman rushed in followed through, and the referee stepped in to stop the action.

The funny thing is that Silva unconsciously held the referee’s legs. I guess his body still reacts as if he is still in a fight. But that was not the case–he was out.

Weidman becomes the new middleweight champion and improve his undefeated record to 10-0.

Tsk. Tsk. Tsk. you can’t just be kidding in a fight. It is a serious thing. It may cause a life at times.