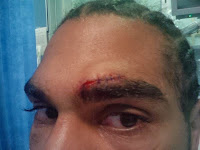 A very disappointing development now for the all-British heavyweight non-title showdown between David Haye and Tyson Fury: the fight was postponed in a yet to be determined date. Haye sustained a cut from a sparring on Friday night according to David Haye’s official website the Hayemaker.com. The cut needed six stitches to close.

Davis Haye said on his tweeter that, “This is the worst tweet I’ve ever had send. I’m so sorry everyone.”

The cut, Haye sustained was during the sparring against a 6’9″ Croatian sparring partner–Filip Hrgovic.

Tyson Fury also tweeted and ask for apology to the boxing fans but criticizing Haye saying that “Haye excuses are boring.” The duo are thrashed talking each other even before this fight was agreed.

In the above photo it is very obvious that Haye can not fight next week, (so it is right to postponed the fight) although it is very disappointing to those who already bought tickets and scheduled their travel to the venue at Manchester.

Fury’s tweet might be out of his disappointment but I think this should be subject to his consideration. For sure, Haye did not want also the fight to be postpone nor he don’t want also to wear a stitched cut during his fight next week. That’s odd also.

However, I have a question in my mind: how Haye sparred?  Without headgear? I throw the same question on twitter to Mike Coppinger–USA Today contributor and below is his reply:

@RetechSon you can get cut with headgear on, just a lot harder. He might not have had the faceguard
— Mike Coppinger (@MikeCoppinger) September 21, 2013

In another note: I am interested to know who’s this Filip Hrgovic that busted a spot over Hayes’ eyebrow? How he hard he punches could be, cuts Haye wearing headgear? Well check out the below video.