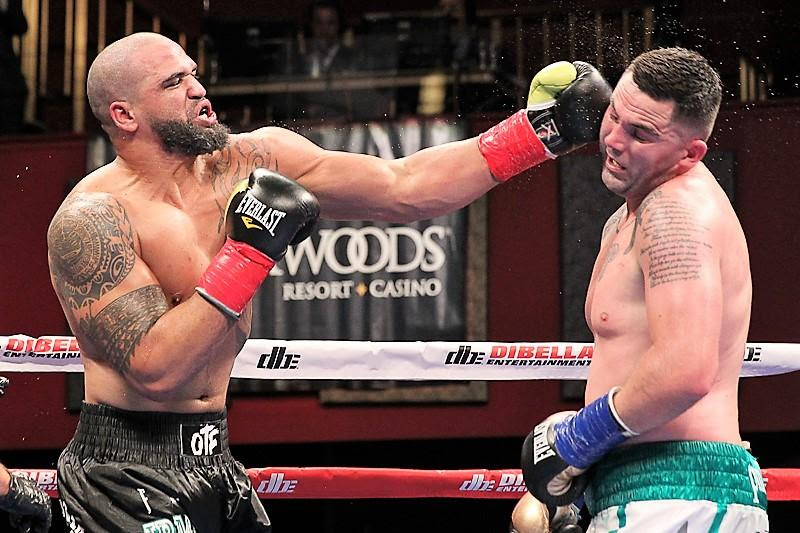 The Broadway Boxing series is promoted by DiBella Entertainment and presented by Nissan of Queens, Azad Watches, OPTYX, and Christos Steak House. Last night’s show, which was streamed by FightNight LIVE on Facebook, was promoted in association with Murphys Boxing.

Kennedy (9-0, 5 KOs), fighting out of Galway, Ireland, by way of Boston, battled Santos in a competitive, action-packed brawl to be awarded the N.E. title by scores of 96-93, 96-93, 93-96. The majority of fans in attendance, outside of Kennedy’s Irish supporters, and the ringside media felt that Santos, from Lawrence, MA, had the edge and deserved the decision.

Referee Al LoBianco deducted a point from Santos in the ninth round for a highly questionable low blow and failed to rule a knockdown when it appeared the ropes kept Kennedy upright in a tremendous last round surge from the Dominican American.

Rising Connecticut welterweight star “Marvelous” Mykquan Williams improved his record to 8-0 (4 KOs), pitching a complete shutout in an impressive six-round unanimous decision (all 60-54) win over a much more experienced and considerably taller Evincii “Prize Fighter” Dixon (7-20-2, 2 KOs). Williams is a 19-year-old from East Hartford who is a freshman at Manchester Community College.
Mykquan Williams (L) cruised to another victory

2012 Ukrainian Olympian Ievgen “The Ukrainian Lion” Khytrov (15-1, 13 KOs), fighting out of Brooklyn, bounced back from his only pro loss with a near shutout eight-round decision victory (80-72 twice, 79-73) over his always tough super middleweight adversary, battle-tested veteran Derrick “Superman” Finley (27-22-1, 18 KOs).

“It was different when I first started training after a loss,” Khytrov said after the fight. “I started to think more and work on my defense; to fight much smarter instead of just brawling, throwing punches, like I did before my loss. I came the US four years ago from a small country that’s not rich to become a world champion. I feel I’m back on the right track.
Ievgen Khytrov (R) bounced back with a solid win

Hot New England junior welterweight prospect Adrian “Tonka” Sosa (5-0, 4 KOs) stepped up in class against Mexican Francisco “El Mono” Medel (11-10, 7 KOs), and remained undefeated by displaying his overall game, offensively and defensively. Fighting out of Lawrence, MA, the 2014 N.E. amateur champion Sosa dropped Medal with a straight right in the first round, a sneaky body shot in the second and finished him off in the third with a crisp right to the temple as referee Al LoBianco immediately halted the action.

Pro-debuting welterweights Nicky DeQuattro (1-0, 1 KO) and Timothy Wheeler (0-1) engaged in a street fight from the opening bell until DeQuartro, fighting out of Johnson, RI, connected with an overhand right that dropped his New York City rival.  Moments later, DeQuattro unleashed a four-punch combination that dropped Wheeler for a complete 10-count.

The night started with a barnburner as former Irish amateur standout Ray Moylette(6-0, 2 KOs) kept his undefeated pro record intact but it certainly wasn’t easy.  Moylette overcame a second-round knockdown, coming back strong in the second half of the fight to take a six-round split decision versus game junior welterweight Donte Bryant (1-3-1, 1 KO).

About The Boxing Diary