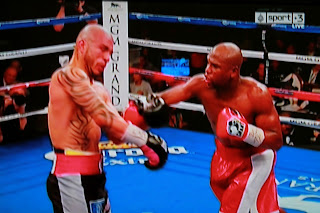 Even though Miguel Cotto loses his bout against defense minister and smart but less footwork–Mayweather during the fight, he was able to expose him (Floyd) a bit.
In my earlier prediction, I picked Mayweather as the winner by unanimous decision (UD 12) if the bout will come to the very last round. However, I didn’t dismiss the possibility of Cotto knocking out Mayweather in Round 1.  And that if he will come out relentless from the first sound of the bell. Because I believed this is the only way to beat Mayweather. Aggressiveness and relentlessness – these was shown by Cotto but came up short in these aspects.

In my round-by-round recap of the fight, I gave Cotto two rounds against ten. It is in these rounds where he bloodied Floyds’ nose and pushed him (Mayweather) to the corner where he landed his best shots although some of those shots were blocked by Floyds’ trademark shoulder roll.
If Cotto cornered Floyd more often against the rope and unleashed more flurries but cautious for incoming counters, for sure Floyd will be in serious trouble all night. That is why boxing fans want Pacquiao to fight Floyd not just because they are the best in the world now but with opposite style which is interesting to watch which style will prevail and who will be effective against the other.
Pacman has the aggressiveness and relentlessness that I am talking about plus quick footwork and side-to-side movement to evade counters, which Cotto came-up short in his fight yesterday. It is noted that at times Cotto stands idle in front of Mayweather and is susceptible to sneaky left hook and right uppercut – Floyds’ effective punch during the fight.
Prev postNext post
Use ← → (arrow) keys to browse
Facebook Comments